Thank you for contacting us!

Pushing Daisies achieved much success with first album, Pretending To Be Famous, and the break-out single Disagree, which earned impressive radio play on commercial stations across Canada, and put a video in regular rotation on Much Music. A showcase at Canadian Music Week where they were named winners of the Rising Star Award and a busy touring schedule the following summer found them on the road and playing to sold out arenas as opening act on The Guess Who’s “Running Back Thru Canada Tour.”

Their highly anticipated sophomore disc, How It Makes You Feel, was released in late 2005 to a sold out crowd in their hometown of Winnipeg. The album’s first two singles, Punches and The Weekend, received regular rotation on Canada’s commercial radio. Other stand-out tracks from How It Makes You Feel include Fall Back Into Me, a melodious tune that landed a spot on Global’s hit television series Falcon Beach; and Stranger, which took top marks in the Canadian Music Week Songwriters’ Awards.

In 2006, Pushing Daisies wrote and recorded C'Mon C'Mon, the Official Song of the 2006 Grey Cup for the Canadian Football League. The single was played on major TV stations in Canada and the USA and released on radio in Canada.

In May 2009, “Your Devils and Your Angels”, The Pushing Daisies third studio album was released, with the lead single “Ride” hitting Canadian Radio full speed and “Blood On The Dance Floor” debuting on Hockey Night In Canada during the Stanley Cup Playoffs. 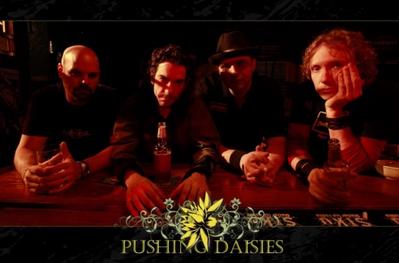 live at the park theatre

live in the shaw studio